Reflecting on a few years back…
By Pastor Harold Kilborn

We are honored to be able to share the message to the Kauai Christian community through our weekly program on the Ho’ike Community Television channel. The Garden Island Newspaper was there when The Koloa Church received community recognition in 2016 as the Ho’ike Producer of the Year. It is our hope that we will continue to be blessed with the opportunity to share God’s message to the folks that are unable to attend our services in person.

‘I remember Ho’ike first began in a house not far from the church in Koloa. We could walk there,’ Pastor Kilborn said. It wasn’t long before the church had a television program on Ho’ike Kauai Community Television.

During this long journey, there have been many people who helped produce the weekly television program that airs in Kauai on cable channel 54. Today, the church has volunteers who serve behind the scenes as videographers, sound engineer’s, visual aid operators and a stage manager. More volunteers serve in front of the cameras on the praise and worship team and there is even an ukulele player.

Visitors to the church can witness modern Christian Hula, with a kumu hula who leads a group of dancers in performance once a month during church service.

The visitors have the opportunity to ring the bell in the tall white steeple and learn about how it was manufactured 158 years ago in Philadelphia, the home of the Liberty Bell. This steeple served as a landmark in the early days of the church and was reported to have been used by ship captains as their guide to shore.

‘Visitors love the history and culture of our island,’ Pastor Kilborn said. On Sundays, the church serves coffee on the lanai where visitors can “talk story” with locals.

As a community church, Pastor Kilborn reaches out through the television program with a message of hope. He often sponsors young adults who must do community service. Kauai residents who are shut-ins can watch the program on Hoike television and feel a part of the community when they can see local people and the sights of the island. The program often features the blowing of the conch shell and ocean waves along Kauai beaches.

In the letter announcing the recognition of the award, J Robertson, the managing director of Ho’ike, recognized the church for ‘the outstanding work and community contributions your church has created for broadcast on Ho’ike. We also recognize the significant achievement The Church at Koloa has established for many years. The island is indeed richer for your efforts. We are extremely impressed with the regular dedication in providing exceptional, positive and uplifting programs that inspire our island.’

What does the future hold?

‘With the help of young people now coming into the church, we hope to expand our television program that is filmed right here on our beautiful Kauai to the other Hawaiian Islands,’ Pastor Kilborn said. 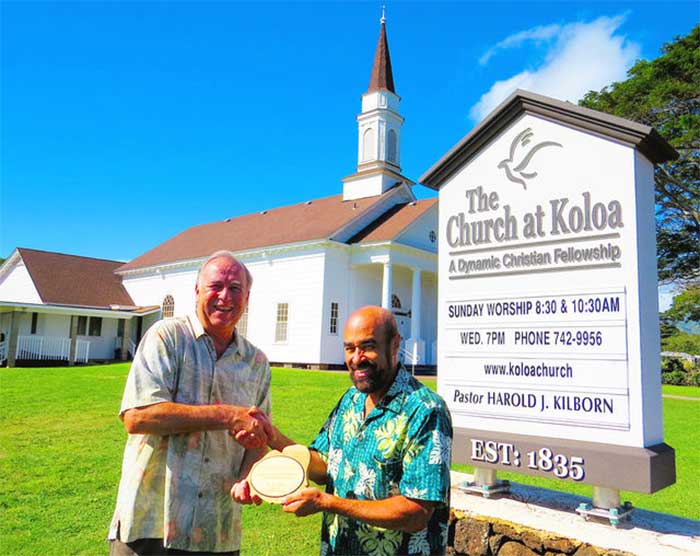